The Challenge of Creating Big: Capturing Melbourne on the Art Tram

An Interview with Nyein Chan Aung 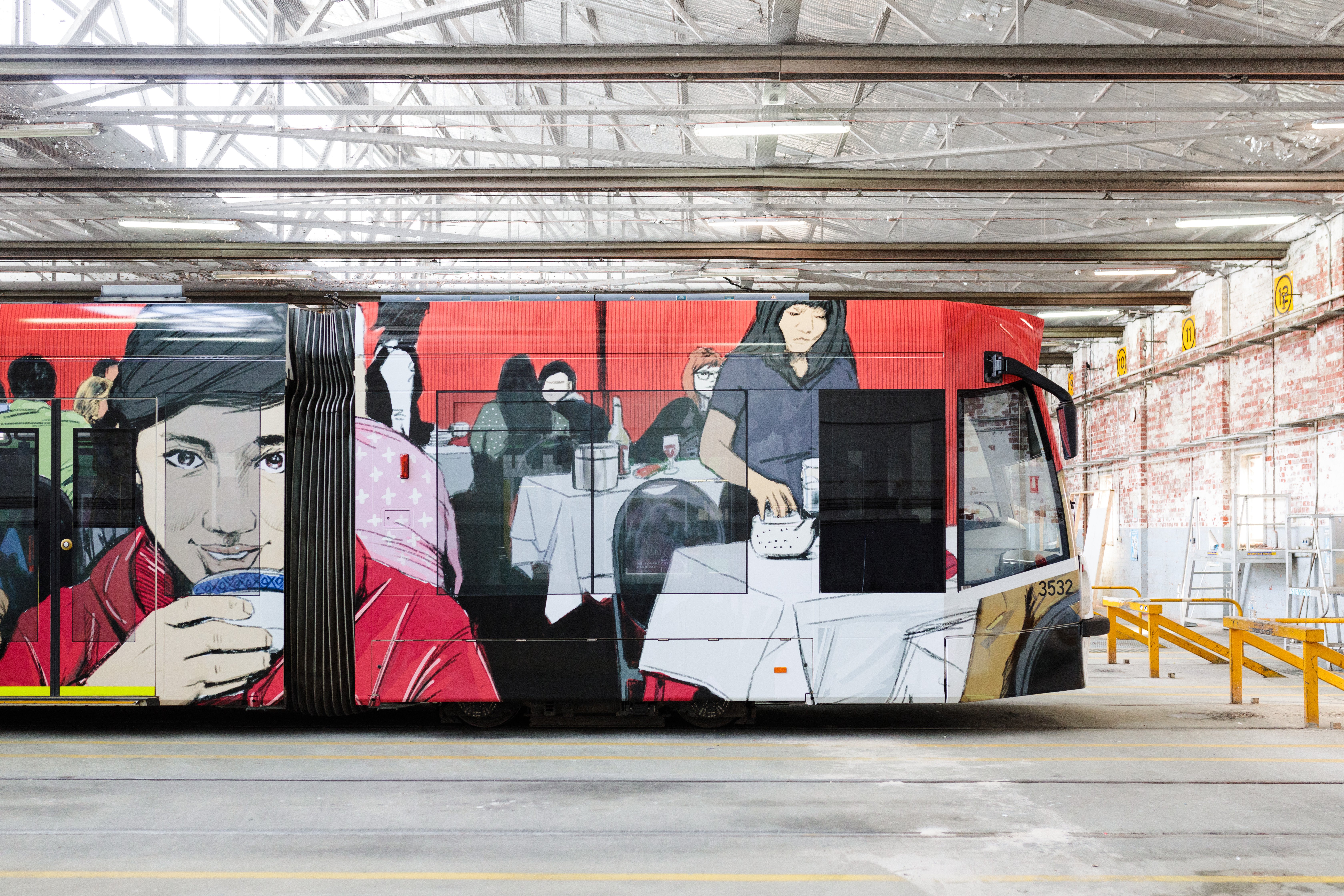 My name is Nyein Chan Aung, and I am an Industrial Designer, Design Researcher and Artist. I was born in Myanmar, but I studied in the US and Australia, and I decided to live permanently in Australia in 2016. Art and Design is my driving purpose in life, and one could argue that it’s even my survival instinct.

At one point, I gave myself a mission to only involve myself in projects that genuinely excite me. I then adopted a motto that goes “Nyein, who makes cool stuff.” That led me on a journey of project scoping, and I ended up taking on a PhD in Industrial Design. The PhD was what’s called a practice-based (or studio-based) PhD that came together through an industry partnership. Practice-based design research is where you “design” something as a contribution to new knowledge. The project was around sleep and air travel, and as a result, I designed an aircraft cabin concept that helps people in Economy sleep better. The outcomes were incredibly well received and led to some significant design breakthroughs which are currently filed for patents.

After that, I found a strong desire to position myself as a designer in mobility, health and well-being. Currently, I work as a Senior Design Researcher at Design Health Collab. It's a design research lab that is dedicated to the collaborative study and creation of high-impact healthcare products and services. The lab operates within Monash University's faculty of Art Design and Architecture (MADA). I do this work for about three days a week. For roughly a day a week, I teach at MADA in Industrial Design and Interaction Design. That leaves me with one day each week to either pursue my art practice or take on some design consultation work.

What inspires you to design and create?

People and nature. I’m continually drawing from and affecting back to human behaviour and physiology as well as the natural world around us.

Congratulations on your stunning piece for the Melbourne International Arts Festival Art Trams challenge! What are you sharing with the city and the world through your art?

The Late Supper is my interpretation of the iconic painting The Last Supper (1495–1498) by Leonardo da Vinci. Like The Last Supper, this illustration also depicts people enjoying a supper meal. However, the similarities end there. While The Last Supper represents the scene of the last supper of Jesus Christ with his apostles, The Late Supper is an illustration based on sketches of unknown customers (except for one) at one of Melbourne's treasured late-night establishments, Supper Inn Chinese Restaurant.

The illustration shows neither the patrons nor the restaurant interior in complete likeness. The patrons seen here were never at the restaurant at the same time, and many of them were not even seated together. The only person identifiable in the illustration is the woman in the middle of the composition. She is Dr. Thinn Thinn Khine, my wife and my muse. I paint and draw her more than any other subject.

The Late Supper is an attempt at capturing the diversity, community and culture of Melbourne. Melbourne's dining landscape would be unthinkable without the Supper Inn, and likewise, the culture of Melbourne would be unrecognisable without her astonishingly diverse community. A visit to Supper Inn at midnight on any given day will attest to these sentiments. Here, every night, you'll find people from all walks of life, professions and cultural backgrounds sitting together to finish their day with a chaser meal.

Can you share a bit about how you created the piece? What was your creative process like?

I think the days of having to learn or create a specialized methodology for creating work digitally is leaving us. I don’t think it’ll ever feel as natural as drawing with actual paper and pencil but at the same time, the learning curve is relaxing more and more.

What I’m trying to say is that my digital and traditional making processes are not that different anymore. I start with a pencil sketch to outline the subjects and the composition, I commit to lines I like with a bolder tool like an ink pen, I then create value and render the piece going from light hues to dark hues. 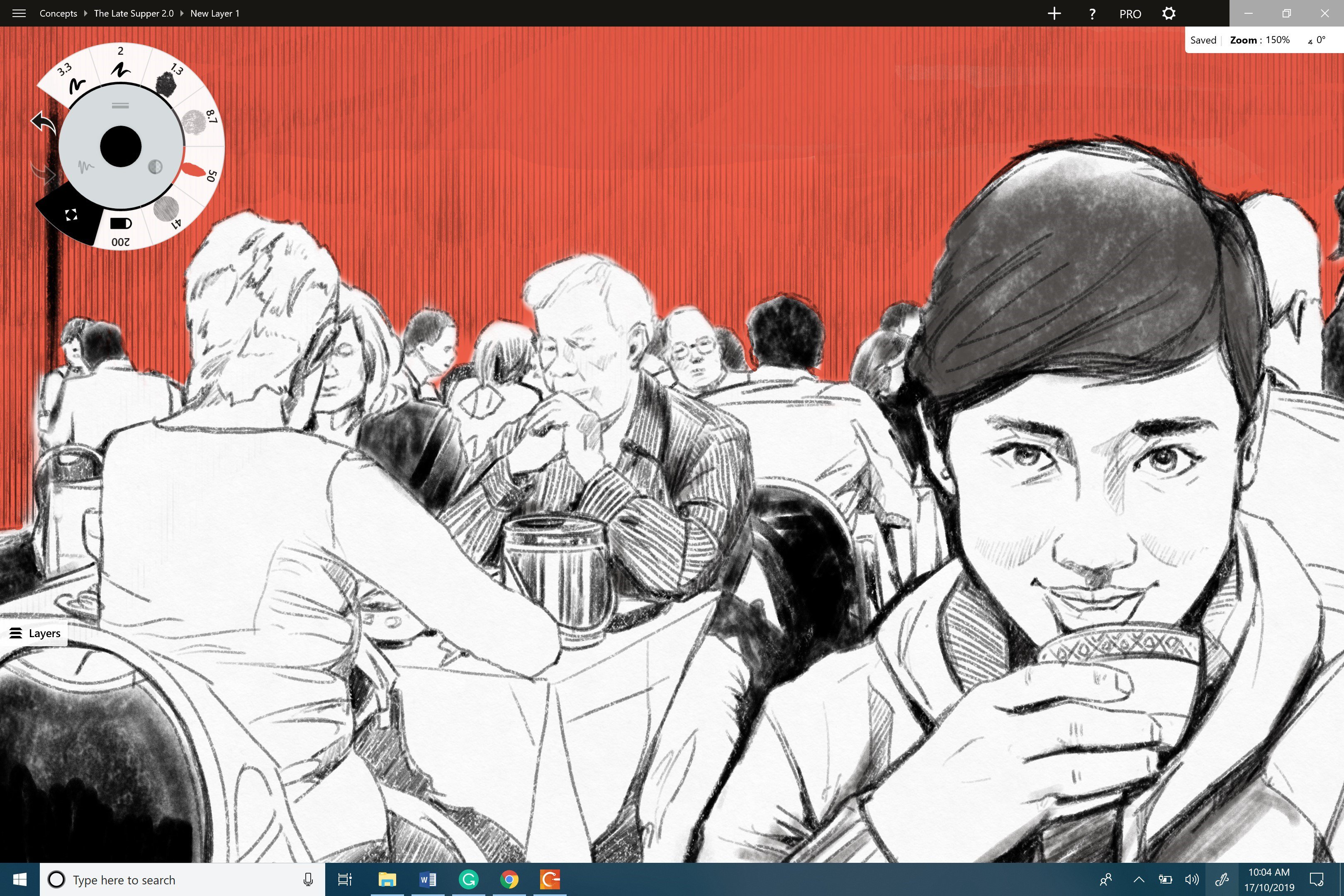 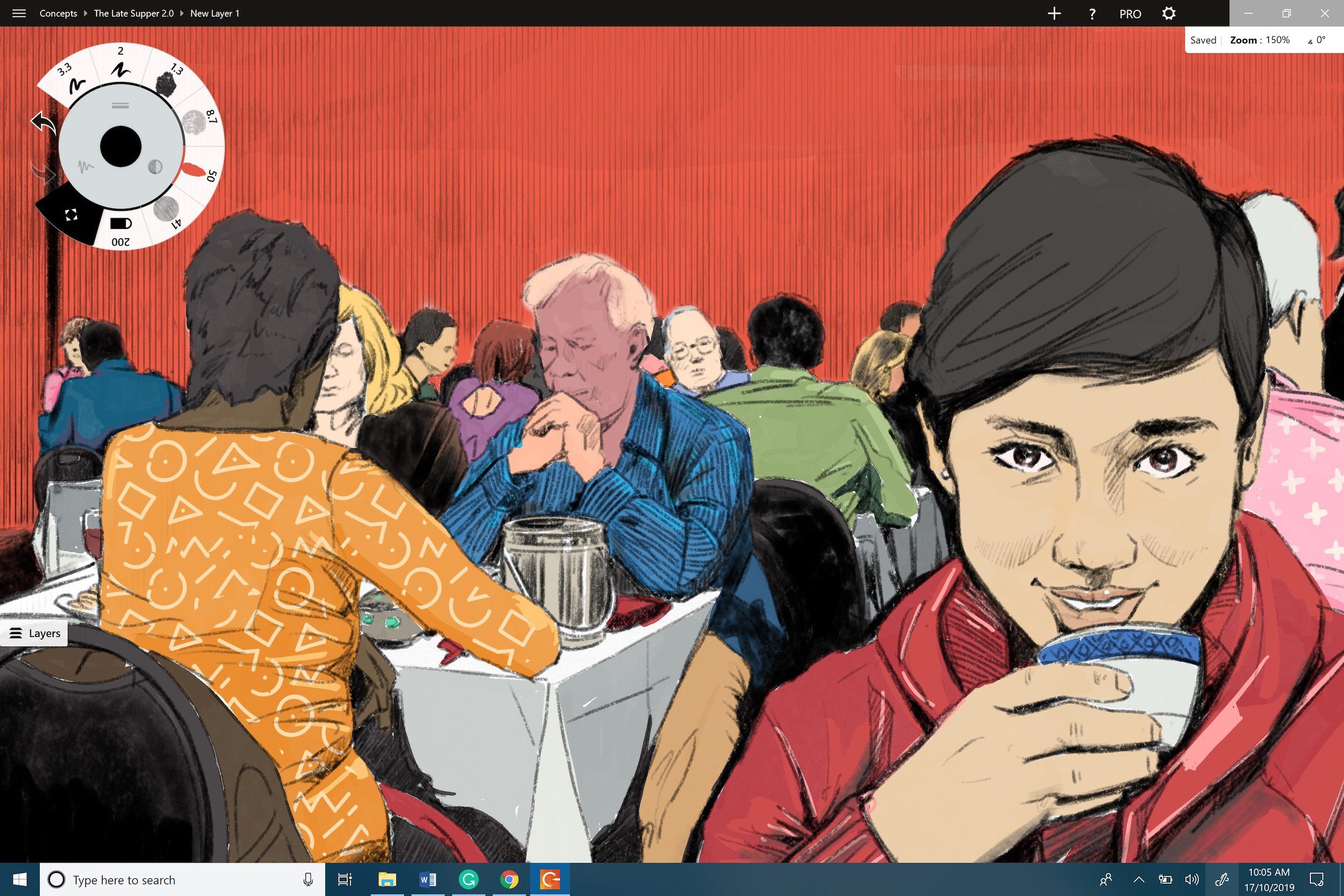 Your methods don’t have to be clever; they just have to work. It’s your “concept” that’s key. (See what I did there?)

Creating something large enough for a full tram is a huge challenge! How did you approach this?

Creating tram art is a “huge” challenge (I got another one in). On a more serious note, a tram as a canvas is a truly unique one. It has areas that cannot be covered due to engineering and operational parameters, and it has surfaces that are complex for structural and aerodynamic reasons. Furthermore, it’s meant to be on the move. So like most Industrial Designers, I began by understanding the vehicle through many sketches. Once I knew the canvas intimately, I started brainstorming compositions that would work with its parameters and proportions.

You mentioned you created your artwork on a Surface tablet using Concepts. What were the advantages of working digitally on a Surface? How did Concepts help you accomplish your work?

I can only create art during my spare time at this stage in my life, but I live and work in two different cities, so my train commute is about an hour each way. My Surface Book 2 is incredibly mobile, and it allows me to switch between office work and creative work seamlessly. It was well suited to let me paint for a tram... while I was on a train.

I illustrated The Late Supper specifically to serve as an EOI for the Melbourne Art Trams program. I knew that the art was going to be printed and applied over a massive vehicle exterior, so I decided that I would create the artwork digitally. I didn't know which tram model my art would be placed on if I won, so I chose Concepts because I needed the result to be reasonably resolution-independent and easily modifiable.

Melbourne has a fleet of roughly 501 trams as of 2014, and the fleet consists of seven classes with different models under each class. The chosen tram could have been anything from a one-car tram to a five-car tram. We were asked by the Melbourne International Arts Festival to submit our EOIs based on a D1 tram, so I did as instructed. I was fortunate because the Festival decided to apply my art to a D1 as well, so I didn’t need to change much. However, the graphic designer from the Festival had a few suggestions I thought were great calls, so I took her feedback, added some height and switched the composition around slightly.

Do you have any thoughts for those of us who are looking to create big for a goal or challenge?

Technology is on your side now. You can mock up surfaces of any shape and size digitally, and zoom in and out as you like while designing. When you’re ready to apply the design to your real world canvas, wall or tram exterior, there are many ways to either print and adhere, or to place marks and outlines as guides when you start drawing and painting. So I’d like to suggest you worry less about how and instead think more about what kind of art and imagery you would like to put into the world. 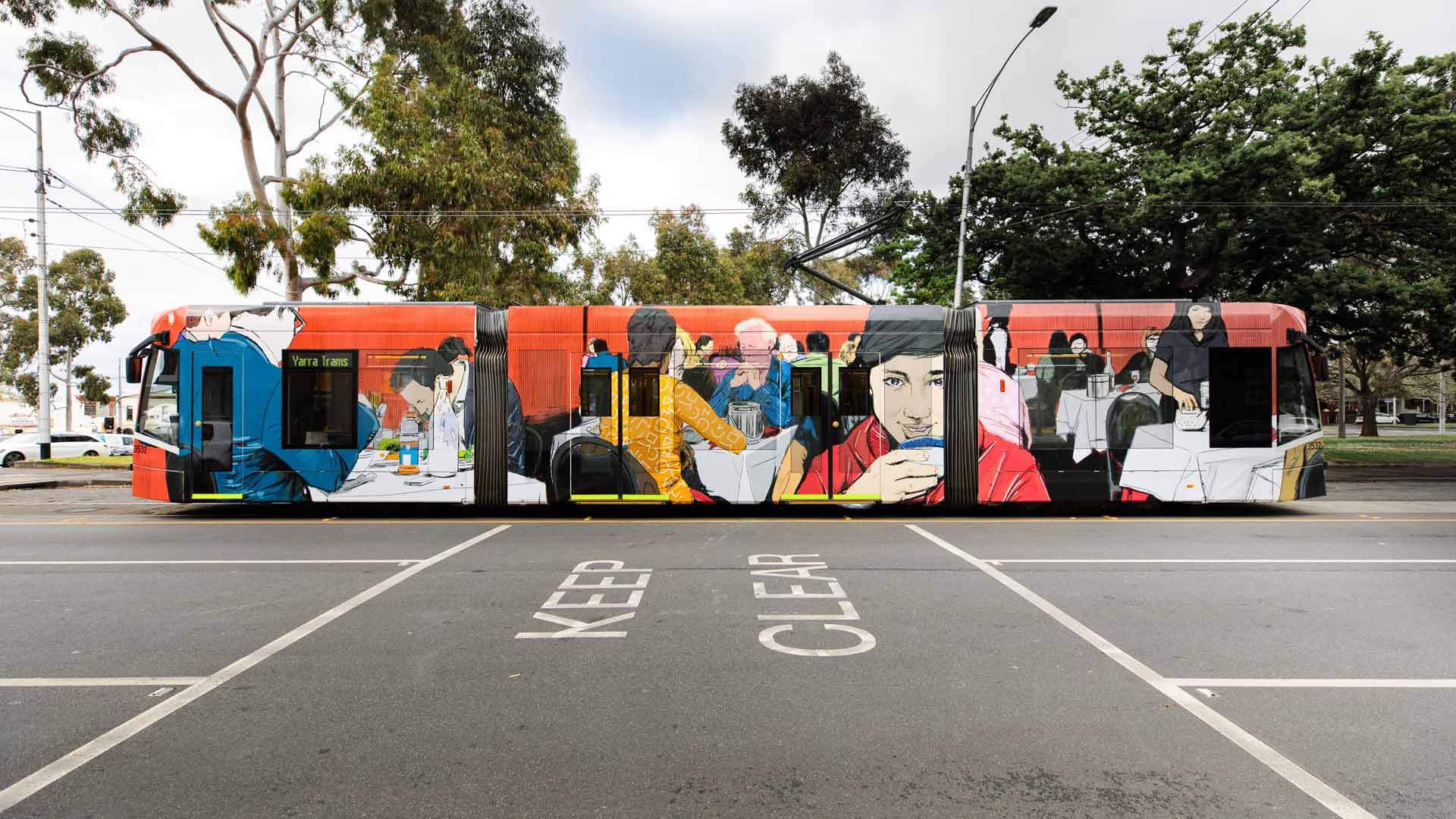 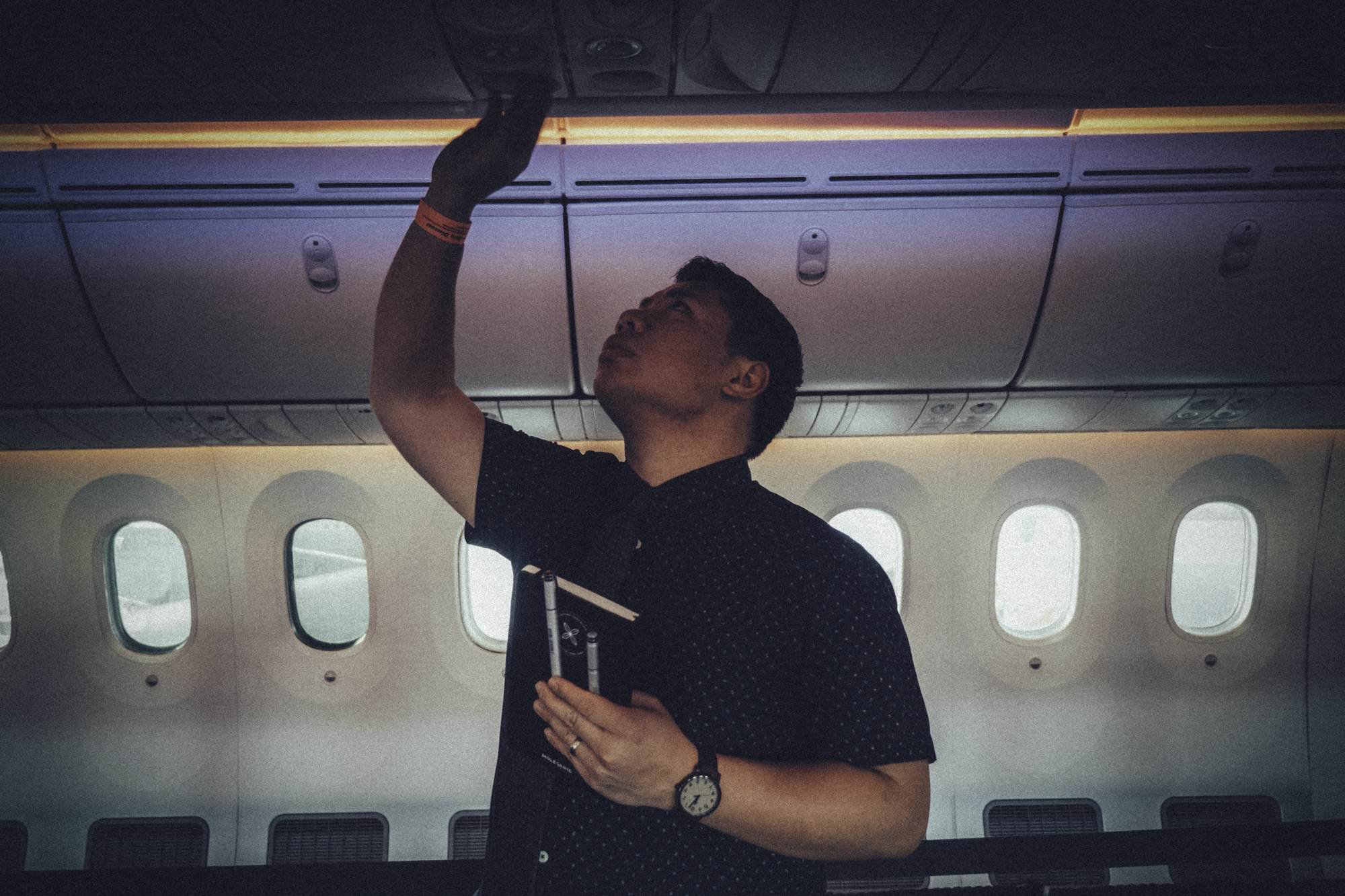 Nyein Chan Aung is an award-winning Industrial Designer, Design Researcher and Artist with a PhD in Industrial Design. His design practice takes place at the intersection of mobility, health and well-being, while his art explores fictionalised and artistic representations of people, places, nature and thoughts. You can read more about Nyein at www.nyeinaung.com or follow him on Instagram.

The Art of Storyboarding - An Interview with Artist Mimi Chao

Imagining the Grinch: Creating Concept Art for Film - An Interview with Yarrow Cheney

Jewelry Design with the iPad Pro - An Interview with Kate Case