When you sketch objects, characters and landscapes, drawing convincingly takes a bit of perspective. Learn how to draw in One Point, Two Point and Three Point Perspectives with Lasse Pekkala, and turn your ideas into 3-dimensional realities.

Learn how to import and use your files below.

To follow along with this tutorial, you'll need a pencil and a straight line tool or ruler to draw perspective lines. Some drawing apps provide rulers or straight line tools to help you draw - Concepts has an instant straight line tool built in for any brush. Line Smoothing allows you to smooth the rough edges of your drawing any amount, but at 100% it creates straight lines that follow the tip of your stylus as you draw.

To set your brush to 100% smoothing, tap your brush on the tool wheel to activate it. Then tap the wriggled line on the inner ring of the tool wheel and slide the slider all the way to 100%. You can also tap+hold on one of the four preset values and type in 100%.

We recommend you have one pen or pencil set to 100% smoothing for the duration of the movie, and set another tool to the smoothing you prefer for any other lines you draw in your object. 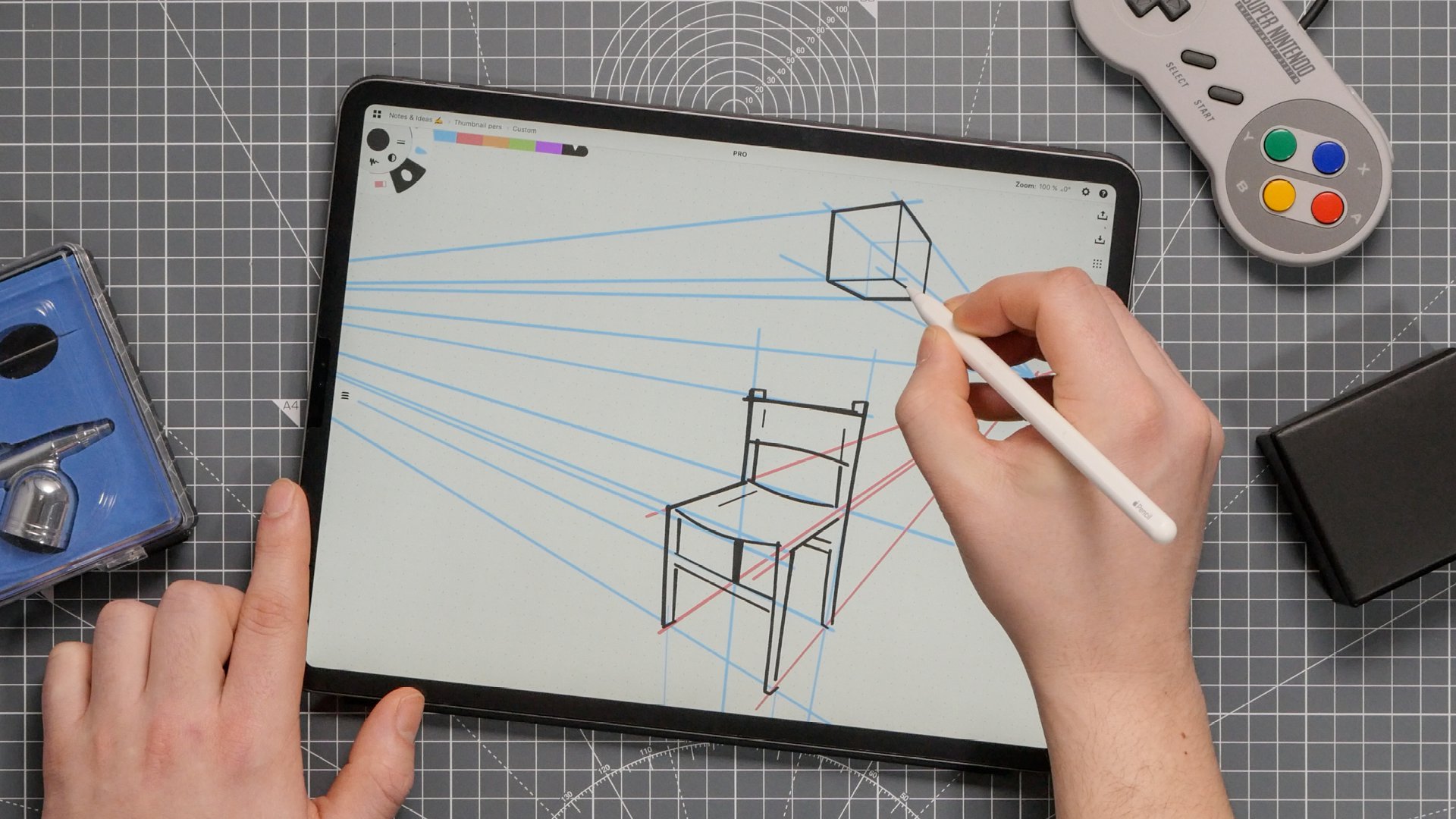 Your eyes are built to see things in perspective. When you look at the world, you perceive it in a three dimensional space with point of view, depth, height and angle. You can help the illusion of reality on your 2-dimensional canvas by adding these elements into your drawing. Perspective lines are used in drafting, design and illustration to show 3-dimensional landscape in a structure or scene.

•  To create a drawing with One Point Perspective, first draw a Horizon Line. The Horizon Line represents your Eye Level. Whether you are standing, sitting or tilting your head, the Horizon Line creates the horizontal line that extends from one end of your vision to the other.

•  Next, place a mark called a Vanishing Point anywhere along the Horizon Line. This Vanishing Point is the focal point of your vision, and your Perspective Lines recede from the foreground to this point. All points on the object you draw will lead back toward this point, creating what is called a Perspective Grid.

•  Perspective Lines are any line that follows your Line of Vision. Wherever your eye is focused, whether it be above or below the Horizon Line, anywhere in the Picture Plane aka what you see before you (aka the Canvas), or on a point of your object in the foreground, you will draw a Perspective Line.

•  Next, draw a line parallel to the Horizon Line somewhere in the foreground. This is the beginning of your object, be it a box, a building, a landscape or a character.

•  From one End Point, draw a straight line to the Vanishing Point on the Horizon Line. From here, you can see the perspective your object will take as it recedes into the background. Use these lines to frame the back face of your object, then draw lines to connect the back points with the front points.

•  Draw a Vertical Line on the canvas perpendicular to the Horizon Line, and connect the top End Point of the line to each of the two Vanishing Points. Then do the same for the bottom point.

•  In Two Point Perspective, your Vertical Lines will always be parallel to each other, and they will be directly perpendicular to the Horizon Line. You’ll notice that the box you draw has rotated to an angle, and this line is the front edge at the front of the canvas, not the front face. You can now see two faces of the box instead of just one.

•  Connecting your points to each of the two points on the Horizon Line creates a Perspective Grid in three dimensions - the front, center and rear-most spaces for your object.

•  The closer you move a drawing toward a vanishing point on the line, the more distortion appears. Having the points relatively far from the Horizon Line results in a more natural look.

•  Now draw a Third Vanishing Point anywhere within the Picture Plane or canvas. Draw lines from this point upward toward your Horizon Line to create a fourth dimension on your Grid. Now draw in a box using this Grid.

•  You'll notice you drew this Grid backwards to the layouts in the last two Perspectives, because you drew the Grid first and then the point. The difference is that the Grid helps you to define the foremost point, and that it is a Point, not an edge or a face. This is to make clear what your Grid is, and how to align your object within the space.

•  Keep your point at the front-most center, and draw your lines for the remaining three faces (not two or one) toward each of the Vanishing Points. Your object's frame is complete.

•  Three Point Perspective is used when drawing tall buildings or landscapes, providing a view from either above the object - Bird’s Eye View, or below the object - Worm’s Eye View.

One Point Perspective tends to make things look static, as you are viewing them head on and can’t see what is behind the front face. Shifting to Two Point Perspective allows you to see an object from more than one angle at a time, while Three Point Perspective gives you futher angles - each of these is more dynamic in nature. Even as you see people or objects from multiple angles and this gives you an idea of their depth or volume, seeing multiple points of the object in a drawing will give you a feeling of understanding it more completely in your mind, and thus create a deeper illusion of reality.

Once you are comfortable with each type of perspective, practice imagining and drawing objects without the lines. It will help mature your vision and drawing skills. They don’t have to be perfect. Seeing objects in full volume in your imagination will help you to draw them convincingly on the page without drawing all the sketch lines. Volume is what gives your sketch its 3-dimensional believability.

These videos share how to create a simple box in perspective. If you look at the shape of other objects, as discussed in Part 2 of this series, you’ll notice most of them are more complex than simple edges. A banana peel or a pyramid will have multiple points or faces, and if you bring it into a Perspective Grid, you’ll find you can connect each point to a Vanishing Point(s) in the Horizon Line and give it dimension. A sphere has infinite points in its face so you would ultimately connect infinite points back to the Horizon Line. People are complicated shapes and follow the same rules - find the front face, then find the back face, then fill in the intermediate points.

Tap the download link and choose your file type from among the options.

1. Download the file and choose whether to save it to your photo roll or files.

2. Drag the file onto the canvas from your photo library or files, or use the Import menu to open the file.

Downloading a CPT or concepts file:

1. Make sure Concepts is already installed on your device - choose your app version here. Download the CPT (Concepts for iOS) or concepts (Concepts for Windows, Android, Chrome OS) file on this device.

2. Tap open the file. This will bring up an option to Open In your app of choice. Tap Concepts.

3. The file will automatically open for you as a new drawing in the app.

4. Sketch right on top of the file or use layers to organize your work (below).

Concepts has an instantaneous straight line creator called 100% Smoothing. Every tool has this option, along with options for size and opacity, found in the inner wheel in the Tool Wheel. Activate your pen, find the wriggled line on the inner ring, then tap it or slide it to find your Smoothing Presets. You can set up to four presets by selecting one and using the slider to adjust, or by tap+holding the preset value and entering your percentage. Find a tutorial on 3 Ways to Make a Straight Line here.

Selection and Duplication of Objects

You’ll notice that at times, Lasse taps+holds on the screen and then circles his objects to move them or to create duplicates. This is called Selection in Concepts, and it allows you to adjust every stroke of your drawing. To Select, tap+hold on the screen, then Lasso your finger or stylus around your object. If this is not working for you:

To Duplicate an object, Select it first, then tap the duplication or copy button on the menu that appears above your selection.

Do you have questions about the tutorial? Please email us at concepts@tophatch.com and we'll be happy to help. Comments and feedback are appreciated!

3 Ways to Draw a Straight Line

Select and Edit Your Notes, Drawings and Designs

The Slice Tool: Divide and Conquer Your Ideas